The Smithsonian Year of Music Object of the Day, November 13: Art Blakey’s Drumstick

During an interview published in a 1978 issue of Modern Drummer, Art Blakey (1919–1990) asserted, “It doesn’t matter what kind of instrument the drummer has. It isn’t the instrument, it’s the musician…I got the fundamentals and rudiments down pretty good. There’s no technique or anything. I don’t think it has anything to do with the stick, ‘cause most of the sticks that come out today are crooked.” Later, in 1986, Blakey relayed the surprised reactions he received from some musicians after they confronted his “unconventional” (read: “not classically trained”) way of playing: “You know, like in England, the guys was there from the symphony orchestras, and the great drum teachers was there, and I was playing. They said, ‘Well, you play so unorthodox,’ I said, ‘Well, what is orthodox? Whether I play orthodox or not, I get results’.” When asked to elaborate on what specifically was so unconventional about his playing, the drummer responded, “Oh, the way I’ll pick up my sticks, or the way I’ll do something. There’s no certain way to do it; you don’t hold the sticks a certain way.” Even a quick listen to his 1973 drum battle with Ginger Baker, throughout which he alternates using a traditional grip and a matched grip, convincingly demonstrates the power of “unorthodox."

For a drummer often credited for the development of hard bop—an R&B-, blues-, Latin-, and gospel-inflected extension of the bebop jazz strain rhythmically pioneered by drummers like Max Roach, Kenny “Klook” Clarke, and Chick Webb in the 1940s to 1960s—Blakey’s disinterest in technique (or at least conventional conceptions of technique) seems somewhat counterintuitive. But perhaps it shouldn’t. After all, “bop,” along with whatever prefixes or qualifiers appended to it, was an industry and fan term for what practitioners typically called “modern music” (or just “music”). And as a self-taught musician honing his skills in the Depression era, it should not be surprising that, for Blakey, abandoning traditional notions of technique or “right” and “wrong” became a precondition for exploration, a liberation of sorts. During wartime, as Blakey recounts, “[Y]ou just couldn’t get no sticks. We played with chair-arms, and it sure did swing, man.” And for all his innovative spirit, swing remained at the heart of his craft.

The stick pictured above, even if just as sufficient as any other in Blakey’s estimation, played a role in transmitting that feeling of incessant drive, motion, explosive power, subtlety, dynamic contrast, and, most importantly, swing. Although it would be going too far to assume that Blakey considered drumstick type to be completely fungible, there is some evidence to suggest that he used different models at different times across his career. Advertised as being “reproduced exactly from his ‘60s model stick,” Bopworks’s Art Blakey Centennial Edition stick is an 8D with a length of 16” and width of .530”. This can be contrasted with the stick made for him by Gretsch—one of his sponsors for a time—which was a 1A. Classification systems vary from manufacturer to manufacturer, so it is hard to know the exact differences. With a height, width, and diameter of 15 7/8”, 5/8”, and 5/8”, respectively, the stick featured here approximates Bopworks’s commemorative stick in size, and its triangular tip presents another commonality.

The drumstick as shown here is well worn, particularly in its tip, shoulder, and upper shaft. As a right-handed drummer, we might speculate that this stick, with its gradual tapering and numerous nicks and gashes, was used for striking crash or ride cymbals. As the foundational time-keeper, replacing the kick drum’s danceable four-on-the-floor pattern, rhythms on the ride accommodated the modernists’ breakneck speeds, unconventional phrasings, and general fluidity. However, any such conjecture is likely futile, as Blakey’s exploration of “extended techniques” was part of his innovative spirit. Expounding upon the drummer’s time playing with Thelonious Monk around 1947—a collaboration that helped solidify the transformation from swing proper to modernist reaches—Burt Korall explains in his Drummin’ Men: The Heartbeat of Jazz—The Bebop Years that, “Blakey plays two basic roles: time player and interpreter-commentator. He adds both reason and the unexpected to the music. Using all the elements of the set, snare, tom-toms, the bass drum, the rims, the drum’s shells, the cymbals—all parts—the hi-hat cymbals and hi-hat stands, and even the sounds of the drumsticks themselves, he simultaneously defines Monk and himself.” One wonders how many “smokin’ press rolls”—Blakey’s common way to introduce soloists, as can be heard at 2:08 of the live recording of Bobby Timmons’s now classic “Moanin’” below—were executed on this drumstick. 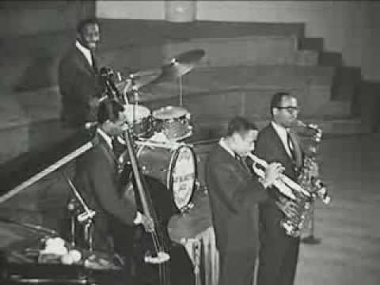 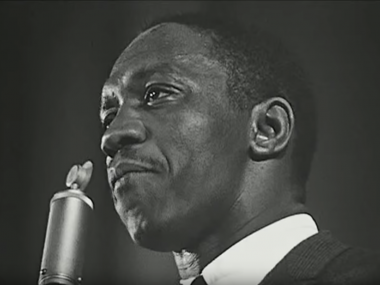 Regardless of time, personnel, or style, Blakey always sought to bring out the best in those with whom he shared the bandstand. Conceiving of his drumming more as a method through which to enliven others than as conduit for flashy drum solos—though there is no paucity of the latter, to be sure—one of Blakey’s greatest contributions was his ability to accompany, to facilitate, to empathize. In more than one interview, Blakey contends, “Let the punishment fit the crime”; when he played briefly for Duke Ellington, he “played Ellington,” and when he played with Monk, he played Monk “responsively and responsibly.”

Blakey’s impressive career has been well documented, if at times imprecisely relayed by the drummer himself. From the tale of his being forced at gunpoint in 1934 to move out from behind the piano to behind a drum set (to make way for Erroll Garner), to his work in New York City with Fletcher Henderson’s orchestra from 1939 to 1941, to his time with Billy Eckstine’s band between 1944 and 1947 (playing with Charlie Parker and Dizzy Gillespie in 1944), to his brief stint studying religion and philosophy in Africa in the late ‘40s (around which time he adopted the Muslim name Abdullah Ibn Buhaina, or just “Bu” to friends), to eventually taking leadership of his own ensemble, The Jazz Messengers, for roughly 35 years. But across all accounts of Blakey’s life, there is one constant: his vehement drive to accompany and support young, talented jazz musicians. The list of formidable young players who developed their own musical voice as one of Blakey’s Messengers include Johnny Griffin, Freddie Hubbard, Jackie McLean, Lee Morgan, Curtis Fuller, Bobby Timmons, Wayne Shorter, Wallace Roney, Benny Golson, Wynton Marsalis, and Keith Jarrett, to name just a small selection.

Blakey’s success in accessing “the guts of the human soul” was fueled by a profound sensitivity to the desires and abilities of the musicians with whom he worked and the audiences he took care to entertain. If the drumstick here could tell a story, it would be just as much about the musicians it stoked to greatness as it would be the great musician who wielded it.

This post was produced through a partnership between Smithsonian Year of Music and RILM with its blog Bibliolore.

Art Blakey, the dedicated and influential drummer, talks about his start, his career, and his ideas in this excerpt from a long interview recorded in 1976 in Jazz spoken here (1992). (editor)

Art Blakey and the Jazz Messengers was one of the most enduring, popular, reliable, and vital small bands in modern jazz history. Blakey was not only a distinguished, inventive, and powerful drummer, but along with Duke Ellington and Miles Davis, he was one of jazz's foremost talent scouts. The musicians who flowed seamlessly in and out of this constantly evolving collective during its 36-year run were among the most important artists not just of their eras, but of any era. Their respective innovations were vital to the evolution of bebop, hard bop, and neo bop. The multitude of gifted artists who populated the many editions of the Jazz Messengers are critically examined. In addition to dissecting the sidemen's most consequential work with Blakey's band, profiles are offered of everyone from Wynton Marsalis to Terence Blanchard to Hank Mobley to Wayne Shorter to Horace Silver to Keith Jarrett to Curtis Fuller to Steve Davis. Over 30 interviews with surviving graduates of Blakey's hard bop academy were conducted, with many speaking at length of their tenure with the legendary Buhaina for the first time. (publisher)

In the 1950s, Art Blakey and the Jazz Messengers introduced hard bop, a blend of bebop, blues, gospel, and Latin music that has defined the jazz mainstream ever since. Although Blakey's influence as a drummer and bandleader was enormous, his greatest contribution may have been as a mentor to younger musicians such as Wayne Shorter, Freddie Hubbard, Lee Morgan, Jackie McLean, and Wynton Marsalis. Leslie Gourse chronicles Blakey's colorful life and career, from his hardscrabble childhood in Pittsburgh to his final years as an international jazz icon. (publisher)

Purveyor of extraordinary music and an arbiter of cool, Blue Note is the definitive jazz label—signing the best artists, pioneering the best recording techniques, and leading cover design trends with punchy, iconic artwork and typography that shaped the way we see the music itself. The roster of greats who cut indelible sides for the label include Miles Davis, Art Blakey, Thelonious Monk, John Coltrane, Bud Powell, Norah Jones, and many more. Published for Blue Note's 75th anniversary, this volume is the first official illustrated story of the label, from its 1939 roots to its renaissance today. Featuring classic album artwork, unseen contact sheets, rare ephemera from the Blue Note Archives, commentary from some of the biggest names in jazz today, and feature reviews of 75 key albums, this is the definitive book on the legendary label. (publisher)

An interview with the group published in the 22 February 1956 issue of DownBeat.

Examines the history and development of hard bop and its offshoot, soul jazz. Hard bop was the most vital and influential jazz style of its day, and today remains at the core of the modern jazz mainstream. Drawing on bebop and the blues for its foundation, filtered through gospel, Latin, and rhythm-and-blues influences, hard bop was notable for the instrumental virtuosity it required and the elaborate harmonic structures it was built upon. The founding fathers of the form are profiled, Art Blakey and Horace Silver, along with Cannonball Adderley, Donald Byrd, Lou Donaldson, Grant Green, and J.J. Johnson. (publisher)

Illuminates the principal political, religious, and musical contexts through which Art Blakey's travels to Africa and his African diasporic musical explorations of the 1950s might be interpreted. Unraveling his relationship to the African diaspora necessitates exploration of three contexts pertinent to understanding the relationship of African American music and culture to Africa in the mid-20th century: anticolonialism, pan-Africanism, and Islam from the 1920s through the 1940s; African independence, Afro-Cuban music, and religion in the 1950s; and the indefinite nature of musical signification. The masterful disjunction between what Blakey said about his relationship to Africa and African music and what he actually played reveals the complex pathways through which music has mediated and continues to mediate the African diasporic experience. (author)