In this video, Associate Curator of Photographs for Smithsonian at the National Portrait Gallery, Leslie Ureña shares some history about Selena Quintanilla-Pérez' background, music and style as well as her work with portrait photographer Al Rendón. 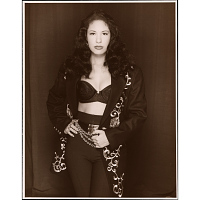 Exhibition Label
Known as the "queen of Tejano music," Selena Quintanilla-Pérez brought wide recognition to this South Texas blend of Mexican and American musical styles. Her powerful voice made her the idol of fans on both sides of the border. Wearing a bustier, tight pants, and a pouting smile, Selena set a new standard for Latin beauty, and her self-confidence on stage brought comparisons with Madonna. In 1990 she released Ven Conmigo, the first Tejano album by a female artist to go gold, and soon she had her own clothing line and national product endorsements. She won a Grammy Award in 1994, but her life ended tragically the following year, when a former president of her fan club shot and killed her. Selena’s death at age twenty-three caused a huge outpouring of grief, and her legend then converged with the rising stardom of fellow Latina singer Jennifer Lopez, who gave a strong performance in her first leading role in Selena (1997).