Discussion about a photograph of Frances Densmore and Mountain Chief sitting in front of the Smithsonian Castle. 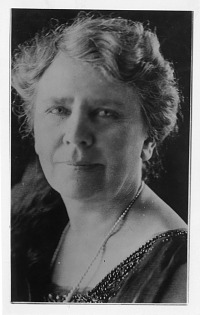 Summary
Ethnologist Frances Densmore (1867-1957) spent much of her career working in collaboration with the Smithsonian Institution's Bureau of Ethnology and the Library of Congress, as she collected and preserved the music and culture of Native Americans. Densmore's mission was to alter the prevailing misrepresentation of Indian music and the under appreciation of its complexity and beauty, a goal she accomplished through prolific publication and careful research.
Cite as
Smithsonian Institution Archives, Accession 90-105, Science Service Records, Image No. SIA2008-0439
Repository Loc.
Smithsonian Institution Archives, Capital Gallery, Suite 3000, MRC 507; 600 Maryland Avenue, SW; Washington, DC 20024-2520