Do you have any costumes from the Broadway musical "Cats"?

Do You Have Anything From the Broadway Musical "Cats"?

Presentation of a costume of Mr. Mistoffelees from the Broadway musical "Cats". 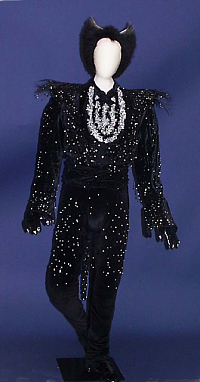 Description
This overjacket is part of a costume worn by actors portraying the character Mr. Mistoffelees in the original Broadway production of Cats. The black velvet jacket is decorated with rhinestones, strands of black bugle beads and fluted clear plastic beads, and miniature white electrical lights which illuminate when terminals at the costume’s fingers are united. Plastic fiber strands are sewn to the heavily padded shoulder caps to simulate cat hair. The jacket has a deep v-shaped neckline leading to a front center Velcro closure.
A black-and-white tuxedo cat, Mr. Mistoffelees possesses magical powers celebrated in the song “Magical Mr. Mistoffelees.” While Mistoffelees sometimes sings depending on the production, it is primarily a featured dancing role. The character has some of the most challenging choreography in the show, including his signature move the “Conjuring Turn,” which is twenty-four consecutive fouettés en tournant. Wayne Sleep originated the role on the West End in 1981 and Timothy Scott later took on the role on Broadway in 1982. On the screen, Jacob Brent portrayed the character in the 1998 film and Laurie Davidson portrayed him in the 2019 film adaptation.
Cats broke Broadway records with its run of 7,485 performances from 1982 until 2000 at New York’s Winter Garden Theatre. The play, written and composed by Andrew Lloyd Webber based on stories and characters from T. S. Eliot's 1939 Old Possum's Book of Practical Cats, and first premiered in London’s West End in 1981. The expensive and spectacular production has been called the first “megamusical,” inaugurating a new period of Broadway theater history when big-budget shows with elaborate special effects, spectacular costumes, and rock music revived the theater district’s sagging fortunes. Cats earned multiple Tony awards in its original run and has since been revived on Broadway and in numerous national and international tours.
Location
Currently not on view