Can You Tell Us About the Dress From the Musical "Hello, Dolly"?

Can You Tell Us About the Dress From the Musical "Hello, Dolly"?

Dwight Bowers, Curator in the Division of Culture and Arts at the National Museum of American History, shows us a costume from the musical "Hello, Dolly!" 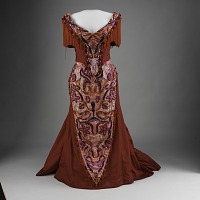 Description
One of the most distinctive comediennes of her generation, Carol Channing (b. 1921) catapulted to stardom as the baby-voiced heroine of the musical Gentlemen Prefer Blondes(1949). Nearly two decades later, her performance as the resourceful Dolly Gallagher Levi in Hello, Dolly! (1964) reaffirmed her standing as a theatrical superstar. Her return to the role of Dolly in various revivals of the show has made the part undoubtedly hers. This red satin, sequin-bedecked costume, designed by Freddy Wittop, was worn by Channing in the vibrant production number built around the show's title song.
Location
Currently not on view