Are there different types of congas?

What are the Differences Between Poncho Sanchez and Mongo Santamaria's Congas?

Marvett Perez (1961-2013), presents and discusses the difference between two types of congas. One owned by Poncho Sanchez and the other by Mongo Santamaria. Both congas are part of the Smithsonian Institution’s collections. 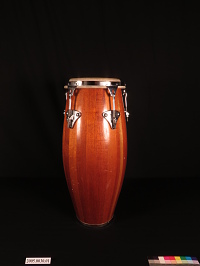 This drum was made by Raul Instrumentos de Percussão in Brazil, in the 1980s. It is a Conga Drum, with a wood shell, metal rings and 5 tension rods. Previously used by Afro-Latin jazz percussionist Ramon "Mongo" Santamaría. There is a printed label on the side of the drum:

Raul Instrumentos de Percussão was founded by two friends, toolmaker Paulo Bauer and percussionist and craftsman Raul Serpeloni. This company began its production in the Brin-Plas factory, in 1984. It was the first factory in Brazil to develop instruments and hardware for drums with the type of quality and design unseen before in the country. In January 1995, Raul left the company and moved out of Sao Paolo, where the company continued building fine instruments with the founder Paulo Bauer and his children, Ricardo and Adriana Bauer.

Ramón "Mongo" Santamaría Rodríguez (1917–2003) was a Cuban percussionist and bandleader who spent most of his career in the United States. Primarily a conga drummer, Santamaría was a leading figure in the pachanga and boogaloo dance crazes of the 1960s. From the 1970s, he recorded mainly salsa and Latin jazz, before retiring in the late 1990s. Santamaria made several recordings as a leader of his own group, as well as a sideman with Fania All-Stars, Tito Puente, Dizzy Gillespie, and Ray Charles.