In Sync: Ancient Chinese Bronze Bells at the Smithsonian

by Keith Wilson and Janet Douglas

Work began over a year ago at the Smithsonian’s Sackler Gallery for an exhibition dedicated to music in ancient China. The project was inspired, in part, by study of the recently acquired Paul Singer collection, which includes many important musical instruments that are not yet widely known. The exhibition, focusing on bronze bells, intends to share with the scholarly and general public new understanding of the subject derived from controlled excavations in China and acoustical studies conducted by physicists.

In the decades since the modern discipline of archaeology was introduced to China in the 1920s, archaeologists have proven that bells were among the first Chinese bronze objects made, beginning at least by 1600 BCE. Scholarly study of excavated examples suggests that distinct musical cultures flourished simultaneously in north and south China and influenced one another over the course of many centuries. This research—involving archaeologists, art historians, musicologists, material scientists, and physicists—has helped establish the date and origins of the large gathering of ancient Chinese bells in Singer’s collection as well as others long displayed at the Freer and Sackler Galleries. It also indicates that the Smithsonian’s holdings span the entire length of the Bronze Age and reflect a variety of regional types. 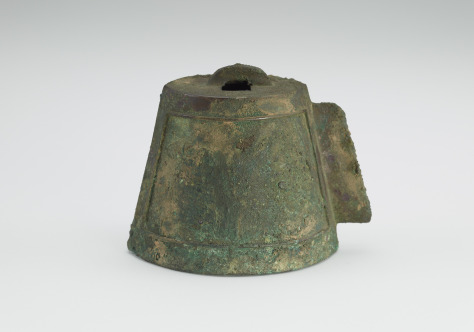 The earliest known examples were designed to hang mouth downward, suspended by a cast loop that also probably held the clapper. Not round in cross-section, these bells have two long, curved faces that meet at a sharp angle. The diminutive Singer piece (fig. 1), possibly made as a collar bell for a domesticated animal, made sound as its wearer moved. Although the purpose of the one projecting fin is unknown, a similar feature occurs on an example excavated at the early Bronze Age site of Erlitou, in the northern province of Henan (ca. 1800–1600 BCE). 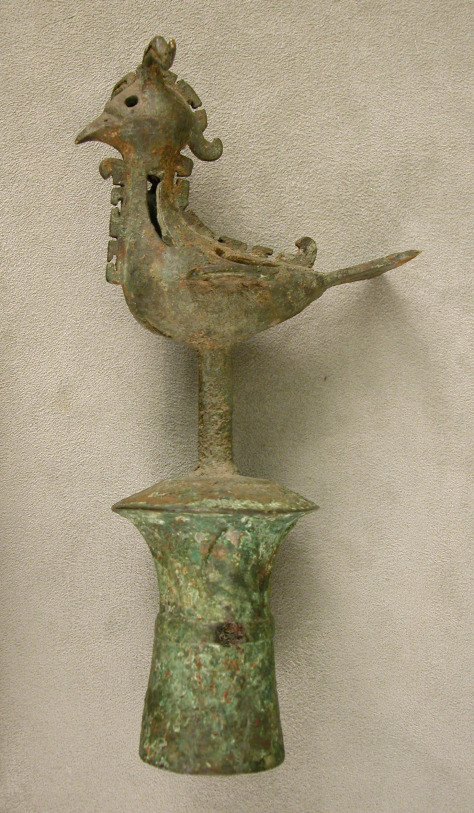 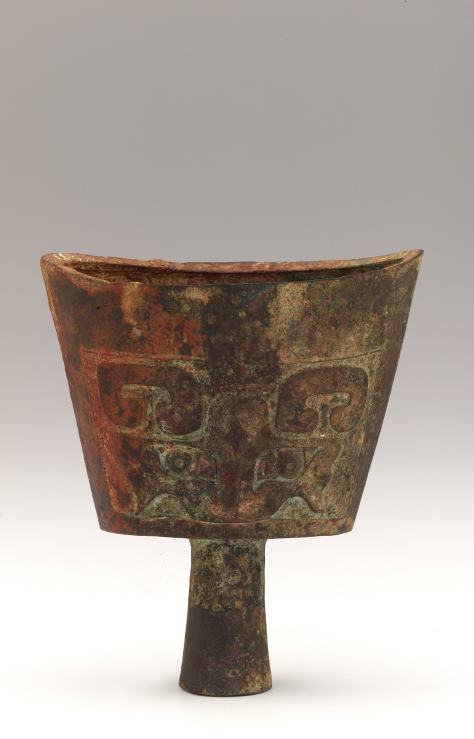 More elaborate rattles and other noise makers, sometimes in the form of representational sculpture (see the Singer yoke filial, fig. 2), are associated with the introduction of wheeled transport in China sometime before 1300 BCE. At about the same time, small bells with hollow, tubular shafts open to the inner cavity began to appear at the late Shang dynasty capital of Anyang. Resembling another Singer example in the Sackler (fig. 3), these bells are sometimes found in graduated sets, an indication that they probably possessed a musical function. Given the orientation of the mask design that routinely decorates their surfaces, these bells must have been played mouth upwards and were struck on the exterior with mallets. 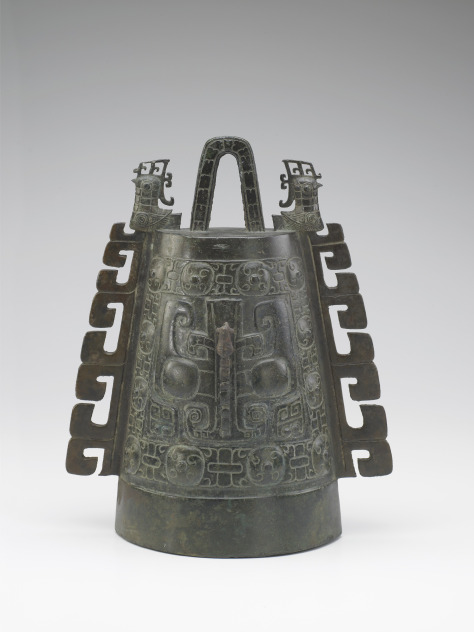 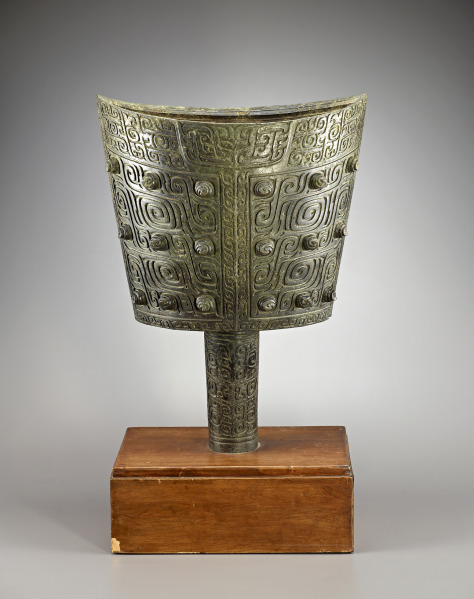 This northern tradition had parallels in south China, where some bells intended for suspension and others designed to be played mouth up have been found. Like related examples in the Sackler (see figs. 4 and 5), bells excavated in the middle and lower Yangzi River valley are large, heavy, and impressively decorated. During the early Bronze Age, however, these southern bells seem not to have been used melodically. They are usually found singly not in tombs but in pit burials. 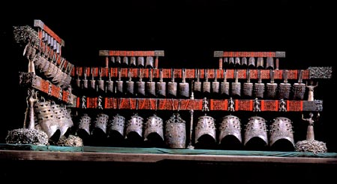 Bell set (bianzhong) found in the tomb of the Marquis Yi of Zeng. Prior to 433 B.C. Hubei Provincial Museum.

Scholars now believe that exchange between cultures in north and south China eventually led to the emergence of tuned sets of bells apparently intended for use in musical ensembles that also featured strings, winds, and percussion during the second half of the Zhou dynasty (770–256 BCE). The most impressive example of this is the set of sixty-four bronze bells (found with remnants of other instruments crafted in more fragile materials) in the tomb of the Marquis Yi of Zeng, who died around 433 BCE and was buried near a tributary of the Yangzi River in what is now Hubei province (fig. 6). Most of the bells in the Marquis’ set were designed to be suspended mouth down from a small ring on their vertical shaft. (The stand in the illustration is a modern reconstruction.)

The acoustical properties of Chinese bells have been studied by Tom Rossing, Department of Physics at Northern Illinois University, and Lothar Von Faulkenhausen, Department of Art History at the University of California (Los Angeles), and their collaborators. Their findings are summarized in Eastern Zhou Ritual Bronzes from the Arthur M. Sackler Collections, edited by Jenny So (1995).

Vibrational motion and sound can be described in terms of a linear combination of the normal modes of vibration, which is determined by the distortion of the bell when struck. In other words, when a bell is struck, it deforms and loses energy by sound radiation in the process. Energy loss occurs through tiny displacements of the bell metal on the order of the wavelength of light, which can be detected by a method called holographic interferometry, a technique that uses lasers to enable the measurement of this displacement with optical precision. Holographic interferometry is non-destructive and can be used to generate contour maps representing the deformation of the bell surface.

Chinese bell casters chose to produce some bells that are lens-shaped in cross-section rather than circular, and the sound radiation from these bells differs depending on where the bell is struck. These bells, known as two-tone bells, can generate two distinct tones called “A-tone” and “B-tone.” Through musical acoustic studies, we are able to understand how bell sounds are generated and how two-tone bells achieve their sounds. The A-tone is produced by striking the center of the bell-face near the sound-bow rim, and the B-tone is produced by striking at the side. The resulting vibrations produce different vibration patterns in the two cases, resulting in a lower and higher tone, respectively.

What methods and design principles did the ancient Chinese casters use to create their bells? As for bell casting, we know the Chinese founders used the same methods involved in casting their ritual vessels, tools, and weapons using clay for both the model and removable mold sections in a method called the “piece-mold process.” An overall view of the progression of bell development in early China is emerging through recent efforts to compare the physical and acoustical properties of sets of bells from various times and regions. Musical acoustic data on bells has been complicated by an incomplete archaeological record as well as by material characteristics of archaeological metals, such as intergranular corrosion and physical distortions and breakage due to burial. Until more data is collected, we must resist attempts to reduce the methods of ancient bell casters throughout China to a single formula.

The earliest bells in Western Zhou (circa 1050–770 BCE) show an erratic progression in their mass and dimensional measurements, where sometimes even smaller bells are heavier than larger ones. Haphazard experimentation in designing chimes is apparent, and no consistent set of principles can be identified. Bells manufactured during the Late Western Zhou sometimes occur in sets of eight bells, but these bells apparently acted more as percussion instruments, where the pentatonic series is incomplete.

Tuning accuracy continued to increase as physical and musical proportioning became more regular in the Eastern Zhou (fig. 7). During the Spring and Autumn period (770–476 BCE), denser note distributions were achieved through the creation of sets with up to twenty-six bells, such as in the Wangsun Gao youngzhong set found at Xiasi (Chu culture). 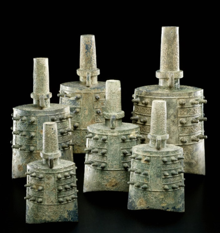 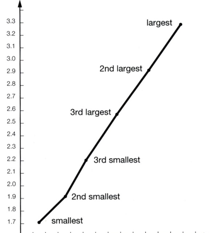 The two-tone bell phenomenon is demonstrated in a digital app that was developed with the Virginia Museum of Fine Arts (VMFA) using a replica bell set owned by the Education Department at the Freer|Sackler. The app allows users to actually “play” the bells, “striking” them at their two strike points. Although it can be used on your smart phone or tablet, it works best on a laptop or desktop computer. 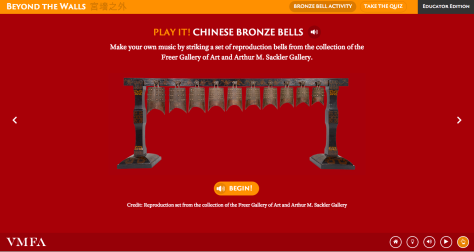 The challenge for this project is marshaling the complex cultural, archaeological, art historical, and acoustical data to provide the most sensible links between ideas, objects, and vehicles of interpretation for the public. If done properly, learners of various profiles and different interests will gain new understandings from the exhibition and related activities. We are particularly aware of new technologies; some of them will allow the exhibition to be more about “sound” and “music” than objects, while others will allow visitors to “see sound.” In all of these respects, this presentation of ancient Chinese bells will be unlike any attempted previously at the Smithsonian.

A specialist in Chinese antiquities, Keith Wilson has worked at the Freer|Sackler since 2006. He has just completed the reinstallation of four galleries dedicated to early Chinese art in the Freer. He has also recently co-organized Echoes of the Past: The Buddhist Cave Temples of Xiangtangshan, a major traveling exhibition dedicated to late sixth-century devotional sculpture in context. Wilson continues his work on cataloguing the ancient jades in the Freer, Sackler, and Singer collections and has also been pursuing a major research project on the Freer’s renowned Cosmic Buddha with the Smithsonian’s Digitization Program Office.

Janet G. Douglas is Head of Technical Studies at the Smithsonian’s Museum Conservation Institute, where she applies heritage science, material research and technical support to Smithsonian museum collections. In 2014 she came from the Arthur M. Sackler Gallery and Freer Gallery of Art’s Department of Conservation and Scientific Research, where she was a conservation scientist for over 20 years. Her area of research has focused on the analysis of a variety of inorganic materials relating to Asian art, particularly stone sculpture, jade, bronze, and other archaeological materials to answer questions of provenance, cultural context and method of manufacture.