For it [the Walkman] permits the possibility…of imposing your soundscape on the surrounding aural environment and thereby domesticating the external world: for a moment, it can all be brought under the STOP/START, FAST FOWARD, PAUSE and REWIND buttons.

When first launched by Sony on July 1, 1979, you would have called it something different depending on where you lived. In the United States, it was the Sound-About; in Sweden, the Freestyle; in the United Kingdom, the Stowaway. Such diversity reflected concerns that, while acceptable in Asia, Latin American, and the Middle East, the name Walkman was just too grammatically awkward, too “Japanese-made” to be marketable in the Anglophone world. However, like much of the music it mediated, its catchiness could not be denied. The Walkman would become the standard not only for a specific stereo cassette player made by Sony, but for all personal cassette players throughout the world. There was a time when, just as you might reach for a Kleenex instead of a tissue, or a Xerox instead of a photocopy, your portable listening device was the Walkman, even if it was not one proper.

As urban populations continue to swell, and portable, “smart” personal devices rapidly accumulate functionalities, the Sony Walkman seems like a relic and a premonition: an icon of the last two decades of the 20th century that helped construct the idea of the modern “urban nomad.”

First introduced in the United States in June of 1980, the TPS-L2 Walkman (featured above) was clad in sleek blue and silver, weighed 14 ounces, and came with a carrying case and headphones. This original model featured two headphone jack sockets and a hotline feature that allowed you to talk to your companion without having to lower the volume or remove your headphones. Early commercials for the product present it as a device that could unite different cultures and ages, a meeting ground for the traditional and modern: 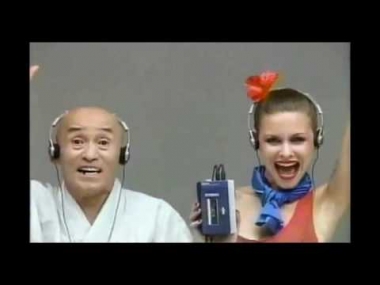 Another commercial—this one featuring the TPS-L2’s direct offspring, the “classic” Walkman II (WM-2)—shows us how the stereo cassette player and radio can provide an enhanced version of the everyday work day. 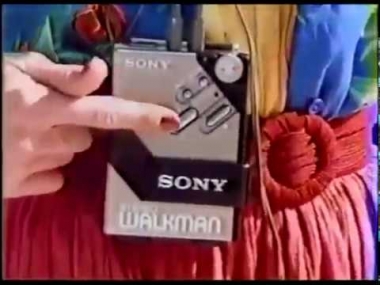 People of all ages, but especially young, energetic, modern urbanites, are illuminated, in color, by the (“hi-fi”) sounds offered by the Walkman. The scene features enclosed, autonomous characters listening to their person device in a social context. The commercial’s negotiation of the ambiguous boundary between diegetic sounds (i.e., music is a part of the narrative; we assume the characters on screen can hear it) and non-diegetic sounds (i.e., disconnected from the narrative; music that remains unheard by characters) drives the point home: when the jingle fades in, only after the protagonist “sees the light” (that shines on the Walkman side of the street of course), some people—couples and shopkeepers—clearly dance to the same music we hear. But perhaps others—the roller skater, the juggler, the skateboarder—are left “to their own devices” (quite literally, as Sony would release different versions of their Walkman to suit specific youth tastes). This polyphony of movement streams suggests a freedom and escape from the silent, black-and-white “dark” that enshrouds the toiling city-dwellers who, alone without the Walkman, fail to take part in a shared experience.

Over and above these media texts’ “datedness” and function (to sell you the product), they point to an issue that is just as provocative now as it was when sociologists and media/cultural studies researchers approached the Walkman in the early 1980s: the social consequences of the potential for personal, portable devices to blur the boundaries between the domestic and public spheres in an urban environment. By roughly 1983, the hotline feature was removed, and two headphone jacks brought down to one. Contrary to Sony head Akio Morita’s conviction that it would be rude for one person to listen to music alone, he discovered shortly after the device’s release that “buyers began to see their little portable stereo sets as very personal.” More than sharing music, people were more interested in curating their own unique “theatrical” experiences—with themselves as protagonist—as they traversed urban environments. The Walkman became a part of an urban strategy, an autonomous and perhaps solitary (but not isolating!) means through which to negotiate the urban soundscape.

If Walkman users were protagonists, some spectators (non-Walkman users) were not entertained or enthused. “Cultural moralists,” as Umberto Eco has called them, had serious reservations about the mixture of the two spheres, public and private, just as Morita did. Included in the primer, Cultural Studies: The Story of the Sony Walkman, which takes the Walkman as a case study through which to examine key concepts in sociology and media studies, we find a reprint of a brief article that details the experiences of one Walkman user in London. In his short piece, “Menace II Society,” Vincent Jackson writes,

You pull out your Walkman, You stick in your tape […] You press the play button. BAM! The Eyes. Ice glares tell it all. In the short time it takes for the other passengers to look you up and down with utter contempt, you have already had a huge label slapped across your forehead. You are a scumbag, a low-life, a loser. For some strange reason, the Walkman has become the scourge of the modern day traveler, the leper’s bell, symbolic of the endemic rebellion in today’s youth culture. Wear a Walkman and you’re travelling strapped. A Menace to Society.

Despite the hyperbolic tone of this account, it is undeniable that, particularly in the direct wake of its release, the Walkman’s ability to facilitate isolation in a public setting, where it “doesn’t belong,” was disquieting to many an onlooker. Never mind that testimony from Walkman users themselves revealed that many found the device not only useful as a way to shut out unwanted aspects of the city, but also to sculpt the city’s sounds and images in such a way as to commune with it. To many, Walkman users were flaunting a secret—what are they listening to?!—in plain sight. Perhaps the silence of this secret was louder (and more offensive) than the cacophony of all the city’s ambulances, police cars, fire engines, construction, and subways combined.

Whatever one’s perspective, it is undeniable that the Walkman opened a door to practices—both intimate and social at once—that have endured. For this reason and many others, it is of extraordinary value, not only as a cultural object, but also as just one example of human beings’ desire to use music as a vehicle through which to situate themselves among others.

This post was produced through a partnership between Smithsonian Year of Music and RILM with its blog Bibliolore.

Examines the auditory experience of self and place by exploring the reasons why and the ways in which people tune into their personal stereos (e.g., Walkmans, etc.) and tune out city sounds. Urban, cultural, and anthropological studies have been dominated by explanations of experiences drawing upon notions of visuality. But culture always has an auditory component that shapes attitudes and behavior—perhaps nowhere more so than in the city, where sound is intensified. Strictly visual approaches to culture are challenged here by proposing an auditory understanding of behavior through an ethnographic analysis of personal stereo use. Our understanding of how people, through the senses, negotiate central experiences of the urban—such as space, place, time, and the management of everyday experience—are reformulated, and the critical role played by technology is examined. (publisher)

What does the Walkman have to do with the 21st century? The long-awaited second edition of this classic textbook takes students on a journey between past and present, giving them the skills do to cultural analysis along the way. Through the notion of the circuit of culture, this book teaches students to critically examine what culture means, and how and why it is enmeshed with the media texts and objects in their lives. Students will gain practical experience with the historical comparative method, learn to think about some of the cultural conundrums of the present and their relation to the past, unpack the key concepts of contemporary culture, such as mobility and materiality, look with fresh eyes at today's media world and the cultural practices it gives rise to, and practice their critical skills with up-to-date exercises and activities. This book remains the perfect how-to for cultural studies. It is an essential classic, reworked for today's students in cultural studies, media studies, and sociology. (publisher)

The 1980 Sony invention has been paramount in the creation of "musica mobilis", a music whose source follows "the corporal transportation of the source owner". The internal effects of listening, the internal-external relationship between inner hearing and outside (urban) sounds, and the external theatricality of "wearing" a Walkman are all examined. It is argued that to think about the Walkman is to reflect on the urban itself.

Since its release in 1979, the Walkman has engendered new modes of musical experience for millions of listeners. Its portability and the apparent isolation offered by its headphones enable Walkman users to listen to music in situations where it would otherwise be impossible. They can also use Walkman music to achieve outcomes for which other forms of music may not be suited. Eleven functions of Walkman music, ten adapted from Michael Bull’s (2000) strategies of Walkman use and one derived from this study’s fieldwork results, are examined here. Following Timothy Rice’s (1987) model for ethnomusicological study, the functions’ origins in historical musical practice are investigated, as well as their maintenance in social interaction and listeners’ individual experience of them. This study demonstrates Walkman listeners are focused entirely on their Walkman music in only two functions, either enjoying it or trying to learn it. Four functions involve Walkman listeners’ interactions with their surroundings—namely, listeners use Walkman music to control their environments’ soundscapes, to ease their negotiation of places they consider unpleasant, to control personal interactions and, in combination with their surroundings, Walkman music gives listeners the impression they are viewing or acting in a film for which their music is the soundtrack. Listeners use Walkman music for its effects on themselves in five functions. They choose rhythmic music for motivation during exercise or music which will influence their mood. Listeners also use Walkman music to simulate the presence of a companion or because they consider it a more enjoyable or productive use of time they would otherwise consider wasted. Finally, Walkman music can prompt listeners’ memories of past events. While similar observations have been made in previous studies and particularly by Bull, music’s role has not been appropriately acknowledged. This study’s examination of Walkman music in terms of the functions it fulfills for listeners corrects this imbalance. Observations in the literature relating to Walkman use are tested for their resonance with Walkman listeners in ethnographic interviews conducted in Adelaide, Australia. Conclusions are drawn regarding the degree of isolation listeners actually achieve from their surroundings and also regarding the relative novelty or otherwise of the uses to which listeners put their Walkman music. (author)