Recovery and Rebirth of a New Orleans Jazz Life

by Michael G. White
The original article, published as a part of the Smithsonian Folkways Magazine, can be found here.

On a hot and humid morning in May 2005, I found myself alone in my car in front of a small Baptist church in Marrero, Louisiana, just across the Mississippi River from New Orleans. It had been exactly thirty years since my first professional music job there, playing clarinet in Ernest “Doc” Paulin’s Brass Band for the church’s anniversary parade. Sitting there, it all came back to me: the smiling church sisters in white, the proud men in black suits, and the anxious children carrying banners. 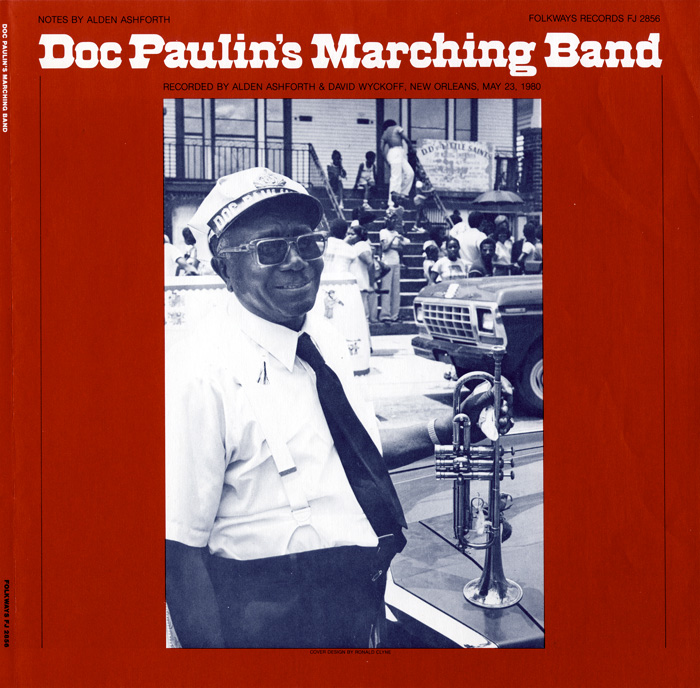 Recorded when Ernest "Doc" Paulin was almost seventy-four years old, this album provides a glimpse into the musical life of a New Orleans marching band.

I remembered that uneasy feeling of not knowing if I could keep up with the band. There had been no rehearsals. There was no written music, not even a set list. As the congregation lined up behind the ministers, Doc Paulin, sixty-four years old, played a couple of quick trumpet notes, and then three thunderous bass drum beats signaled the start of the first song. There was no time to find out the song’s title, the key, or the chord changes. Just play. Suddenly the air was filled with spirited up-tempo music. Somehow the excitement of the moment took over. There were dancing riffs and screaming high notes coming from my clarinet, weaving in and out of the melody and rhythm. The congregation maintained perfect processional order, strutting in a graceful, restrained manner to the band’s jazzed-up hymns: “Lord Lord Lord,” “Just A Closer Walk with Thee,” “Bye and Bye,” and “When the Saints Go Marching In.”

Unexpectedly, for me, this single gig marked the beginning of a life intensely immersed in the New Orleans jazz tradition. I played for four more years with Doc Paulin in dozens of black social club parades, church processions, jazz funerals, and other events.

This music was not the fast commercial version of jazz played on Bourbon Street for tourists. This was the real jazz played in the streets and neighborhoods where the music had been born. In community functions the music represented the hopes, frustrations, joys, and passions of the hundreds of people who followed alongside the processions, putting their words and gestures into movements as they danced the second line. In these celebrations, the hot improvised jazz, mixed with the dancing of social club members and parade followers, created a feeling of unity, euphoria—and true freedom.

Later I joined the local musicians’ union and began many years of an active and adventurous performing life. Over fifteen years, dozens of musicians born between the late 1890s and 1910 had become my friends, mentors, teachers, and bandmates. I learned more from them about early jazz history, legendary figures and bands, and musical individuality than I ever could from books or in schools. Most of the older musicians had known and played with my relatives: Papa John and Willie Joseph and Earl Fouche, who were active since the earliest decades of jazz. Many of them had played with Louis Armstrong, King Oliver, Sidney Bechet, Jelly Roll Morton, George Lewis, and other early jazz legends. They were surprised and pleased to see a young black musician like me so seriously interested in playing their music. Several of them reaffirmed the importance of the music as they anointed from their death beds: “It’s up to you to keep this going now.”

At the time, in the late 1970s and 1980s, the authentic style of traditional jazz in the United States—and even in New Orleans—was rapidly diminishing. I felt the calling and began my endeavor to preserve and spread this musical form that I believe to be one of the world’s greatest.

Finally, a special blessing came. I was appointed the Keller Endowed Chair in the Humanities while I was a Spanish professor at Xavier University. Through this position I carried out the mission of promoting local culture, teaching an African American music history course and producing a series of New Orleans-themed programs. I was now able to devote my entire life to what I came to view as “my calling.”

In late August 2005, I was looking forward to a productive school year. Just before the first weekend of the semester, we heard about a hurricane in the Gulf of Mexico that was heading straight toward New Orleans. Most people thought the call for evacuation would turn out to be just another false alarm, a couple of “vacation days,” and an excuse to party with family and friends out of town. 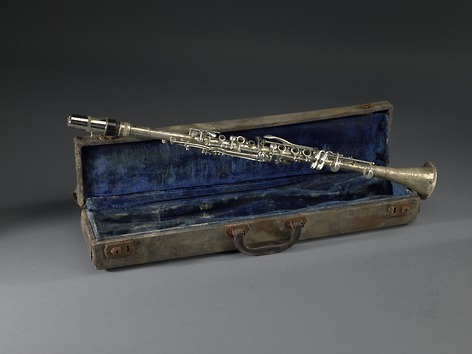 Dr. Michael White, jazz educator and performer, salvaged the contents of his Gentilly home, including a world-class collection of clarinets, one of which he donated to the Smithsonian.

My nightmare evacuation to Houston turned out to be five times longer than the normal six-hour drive. After a restless day in a hotel, we heard that Hurricane Katrina had barely missed New Orleans. As scores of familiar faces breathed a sigh of relief and prepared to return home, news broke that several high drainage levees had broken. The city was rapidly filling up with water.

The nation watched eighty percent of New Orleans flood with as much as ten feet of water. Thousands who had stayed were sifting through murky waters or trapped in attics, on rooftops, and on bridges. Dozens of swollen bodies floated down flooded streets that only a couple days before they had walked down. There was mass panic, terror, looting, and more deaths to come. After a few weeks, the water subsided and we were allowed to return home to survey the damage. It was a horrifying scene driving in: debris everywhere, animal carcasses, a putrid odor, and a thick layer of toxic mud that covered everything. In a city where sound and rhythm formed a constant ancestral heartbeat, there was now a deafening silence. New Orleans had stopped breathing. 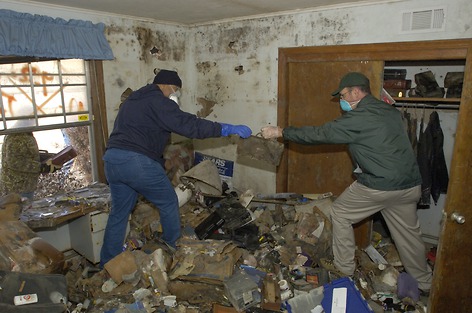 My home—housing a valuable archive of jazz, New Orleans, and African American cultural materials—had been submerged in eight feet of water for nearly three weeks. The toxic flood water and a thick layer of multicolored mold covering floor to ceiling had ruined everything. In my collection there had been thousands of recordings, books, films, music scores, photographs, and memorabilia from the old musicians. There was Sidney Bechet’s white clarinet mouthpiece and another from legendary trumpeter Jabbo Smith that were never found. More than sixty vintage clarinets were destroyed and scattered all over that house, swollen like the dead bodies, tarnished in an array of tragically beautiful colors left by water, mold, and rust. All of my jazz history research and interviews were gone. Those first-hand accounts of legendary players, of musical battles, and of sitting alongside King Oliver’s band remained only as clouded memories in my mind.

As difficult as those material losses were, the displacement and recovery process was much worse, burdened with stress, health issues, and financial strains: gutting the house, dealing with insurance and government agencies, caring for sick elderly relatives, finding housing, and so on. Only prayer and the realization that I still had the music inside of me kept me going.

The jazz funeral philosophy of mourning loss and optimistically transcending to a new existence was a concept that sustained many of us on the long, arduous road to recovery. Nearly a decade after Katrina, many New Orleanians—like the city itself—remain in a state of recovery and transition. Life as we knew it ended on August 29, 2005.

Much has changed. The city is different. We are different. Our understanding of the geographic dangers of living in New Orleans can never be ignored again. Thousands have not returned. Of those who did many are still going through various stages of physical, financial, and emotional recovery. Some of the old neighborhoods are nearly empty or are changing. The city is quickly and quietly being gentrified.

Concerns about the survival and continuation of New Orleans’ unique cultural traditions have been on the minds of many. Recovery in different degrees is taking place everywhere. The Mardi Gras Indians, Skull and Bones gangs, and Baby Dolls still parade on Carnival. Social club second line parades, brass bands, and jazz funerals are frequently seen in community streets. Yet as the city changes and struggles with a plethora of social problems, some wonder how the strong family and community bonds that produced Louis Armstrong, Mahalia Jackson, Fats Domino, and many others can or will endure.

But with every ending comes a new beginning. I was able to return to Xavier and continue my career with renewed vigor. During a brief retreat at the local artist facility A Studio in the Woods, I was able to express many of my emotions about the Katrina experience and the state of New Orleans by composing several new songs, which I later recorded on my album Blue Crescent (Basin Street Records, 2008). 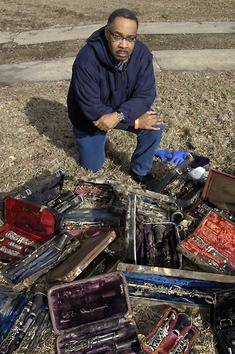 Dr. Michael White clearing out his home after Hurricane Katrina.

When Dan Sheehy, director of Smithsonian Folkways Recordings, approached me about producing a New Orleans album, it was apparent that he understood the importance of authentic local music. He didn’t know, though, that those obscure Folkways recordings of Billie and De De Pierce, Emile Barnes, and the Eureka Brass Band were some of the first recordings of early jazz I ever heard, fueling my initial passion. Over the years, the blues, spirituals, work songs, and Caribbean and African music I heard on the label have broadened my understanding of the roots of jazz and its place in the pantheon of traditional cultures.

Capturing the valued local and signature sound of New Orleans, I compiled New Orleans Brass Bands: Through The Streets of The City to include three dominant styles: the traditional style of the Liberty Brass Band, the transitional approach of the Treme Brass Band, and the modern funk style of the Hot 8 Brass Band. The album contains everything from traditional marches, hymns, dirges, and blues to modern interpretations of rhythm and blues and funky hip-hop-influenced songs that have dominated community parades since the 1980s.

While it is unclear what the future will bring for New Orleans and her special musical traditions, we have documented the important and cherished brass band music in its current manifestations. Hopefully it will serve as a foundation for future creativity. The unique spirit of New Orleans continues to rule the streets of the city. As for me, I will proudly continue to carry the ancestral musical banner until “the butcher cuts me down.”

Michael G. White is a relative of first-generation New Orleans jazz musicians, a professor at Xavier University, and an acclaimed jazz clarinetist, composer, bandleader, writer, producer, and historian. He produced New Orleans Brass Bands: Through the Streets of the City (Smithsonian Folkways, 2015).