The Birth of the Drum Set

There is a heartbreaking scene from the 1947 film New Orleans, in which Billie Holliday, as a maid, gets caught playing the piano and singing the blues when her boss walks in the room.

She is embarrassed, apologizes for the disruption, and says, "I just can't seem to remember not to play it."

That's a good explanation for the new musical styles that were exploding from places like New Orleans in the early twentieth century. Despite racism, segregation, and poverty, and despite the music not being respected as anything special, again and again the players seemed to say, "I just can;t remember not to play it." That's what forges innovation in music: the passion of performers to say something that cannot be expressed by the current tools around them.

Take the drum set. It is fair to say that the current collection of instruments that we think of as "the drums" would not have come together in quite that particular way without the influence of New Orleans culture at the beginning of the twentieth century.

For the drums are not one instrument, but many. The drum set is a hybrid of instruments from around the world, from cultures that were assembling in port cities like New Orleans. The snare and bass drum were once slung over shoulders in European militaries, the drum heads pulled tight by ropes, and that tradition carried over to American armies. Chinese immigrants came to the United States because they were hired or forced into labor, and they brought with them their own centuries-old theater traditions, highlighted by colorfully-painted tom-toms that made a beautiful full sound, distinct from snares or bass drums. Cymbals evolved from bronze cisterns made in places like Turkey and China; they were later pounded into flatter shapes and supplied to countries around Europe for operas and military music, becoming so popular in the United States that Zildjian, the original Turkish cymbal company, eventually moved to Massachusetts.

In the musical chemistry lab of New Orleans in the early 1900s, there was a demand for an ever-increasing variety of sounds from percussionists and a shortage of space on the stage to accommodate those instruments and money in the budget to pay all those musicians. Bandleaders had to maximize what they could from the percussion section.

Drums once were part of the soundtrack to minstrel shows, which, like the vaudeville shows that came later, had to supply not just rhythm but sound effects, atmosphere, and punctuation to jokes. The instruments had to be portable so that the performers could adapt to different stages in these traveling shows.

The drum set was coalescing at the same time jazz was, and they helped to push each other along. The distillation of the different rhythmic instruments into one set to be played by one person meant that the rhythmic interpretation was now codified in one human body. For centuries, percussion instruments in classical music were played by different people, and, perhaps partly for that reason, "groove" and feel were never paramount. For the first time in history, one human body was able to create the pulse, the back beat, the syncopation, and the texture of a percussion part all by itself. The possibilities for more forward, propulsive, linear grooves turned the musical world upside down for decades to come.

Edward "Dee Dee" Chandler was a drummer living in New Orleans at the turn of the century. He played music in two worlds: the down and dirty shows in the brothels of Storyville and the high-society gigs at places like the Grunwald Hotel off of Canal Street. He was mixed race and could roughly pass for white, but when Plessy v. Ferguson was handed down, it included rules limiting the freedom of anyone with even a drop of mixed-race blood from going to places like Grunwald.

But again, from limitation comes innovation. Other people had done such a thing before, but Dee Dee Chandler was perhaps one of the first drummers to use a makeshift pedal to play the bass drum with his foot while playing snare with his hands. Before that you would have to have a different musician play each instrument or use a style called "double drumming," which involved playing bass drum and snare drum simultaneously with both hands and no feet, limiting the kind of rhythms you could express on the snare. The weird contraption that allowed Chandler to play the bass drum with his foot was not smooth like today's pedals and must have been a challenge to play. But it was a point on the evolution of the drum set as a more dynamic instrument that, in just a few decades, would become the lynchpin of jazz ensembles, whose rhythmic playfulness created some of the best music of the century. And it was the music created in those poorer places, with audiences innovating new dance steps like swing, that made jazz music so alive. 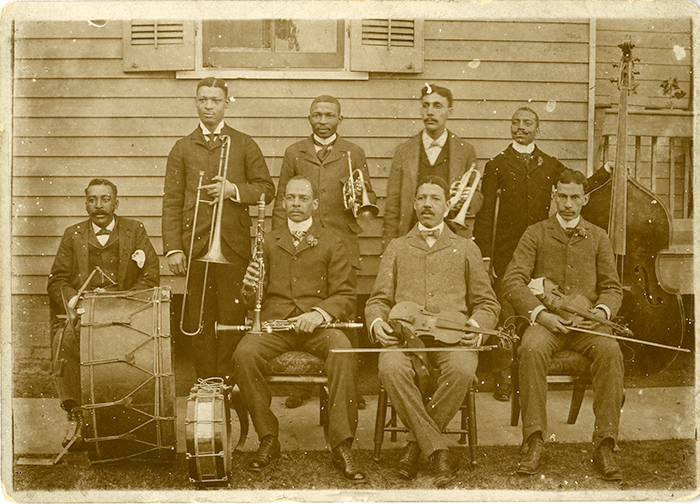 Very little is known about Dee Dee Chandler. He was a drinker. He wore his hat a distinctive way. There is only one photo of him that exists, and it is in this 1896 photo that we can see down at the corner of the frame the pedal on his bass drum. He was considered by other drummers to be one of the best of his time, an, "excellent showman and comic," who "played with the grace of a professional juggler."1 His drums were tuned in a distinctly sharp way that "made the drum roll sound like he was tearing a piece of cloth."2

That's about all that is known about one of the forefathers of the drum set. He indicated the onset of such jazz drumming as that of Baby Dodds on albums like Footnotes to Jazz, Vol. 1: Baby Dodds Talking and Drum Solos and Jazz of the Forties, Vol. 1: Jazz at Town Hall. Jazz - or "jass" as it was referred to then- was not yet seen as a culturally relevant art form that anyone would be interested in studying a century later. But that is where all the most relevant art forms are brewing, in the corners, when no one is paying attention. That amount of time away from attention is important. It leads to experimentation and play. It's telling that one of the few testimonies about Chandler's talent as a drummer mentioned his comic abilities, too. It's not something that you would now expect to hear in a description of a drummer. but in the time when music was telling stories, providing laughter, and a beat to dance to, it was important for the musicians to be versatile.

That versatility was a hallmark of jazz: improvisation, capturing the spirit of the moment. That same improvisation happened with the instruments themselves, when percussionists were literally backed into a corner and had to change how their instruments were played, sit down, and change the world.

Nick Jaina is a writer and musician who splits his time between New Orleans, New York, and Portland, Oregon. His new non-fiction book, Get It While You Can, is out now on Perfect Day Publishing. www.nickjaina.com.