Women in World War I

Women have long been involved in the military during times of war, though not always in a capacity that we might recognize as “traditionally” military.  For centuries women have followed armies, many of them soldiers’ wives, providing indispensable services such as cooking, nursing, and laundry—in fact, “armies could not have functioned as well, perhaps could not have functioned at all, without the service of women.” 1

With the onset of World War I, women took on these same roles and newer ones, but their service during this conflict was significantly different from that of earlier wars.  Thousands of women in the United States formed and/or joined organizations that worked to bring relief to the war-torn countries in Europe, even before official American entry into the war in April 1917.  After the United States joined the Allies, women continued to join these organizations and dedicate themselves to supporting and expanding the war effort.  These groups were highly organized, much like the military, which helped women garner respect from their fellow citizens and have their patriotic endeavors taken seriously.

Aside from their mass involvement in these voluntary organizations and efforts, a key difference between women’s service during World War I and that of previous wars was the class of women involved.  Typically women who followed armies were from the working classes of society, but during the Great War, women from all classes served in many different capacities.  Upper class women were the primary founders and members of voluntary wartime organizations, particularly because they could afford to devote so much of their time and money to these efforts.  Middle- and lower-class women also participated in these organizations and drives, although they were more likely to be serving as nurses with the military or replacing men in their jobs on the home front as the men went off to war.  For the first time in American history, women from every part of the class spectrum were serving in the war in some capacity.

Another significant change to women’s service during the Great War is that American civilian women donned uniforms. The uniforms allowed women to look the part and claim credibility for their services, as well as to be taken seriously by others; many women saw their wartime service as a way to claim full citizenship, and the uniforms symbolized “their credentials as citizens engaged in wartime service.” 2

Other women donned uniforms because of their association with the military—World War I was the first time in American history in which women were officially attached to arms of the American military and government agencies.  Yeomen (F) served with the Navy and the Marine Corps, while the Army Nurse Corps was attached to the Army.  In France, 223 American women popularly known as “Hello Girls” served as long-distance switchboard operators for the U.S. Army Signal Corps. 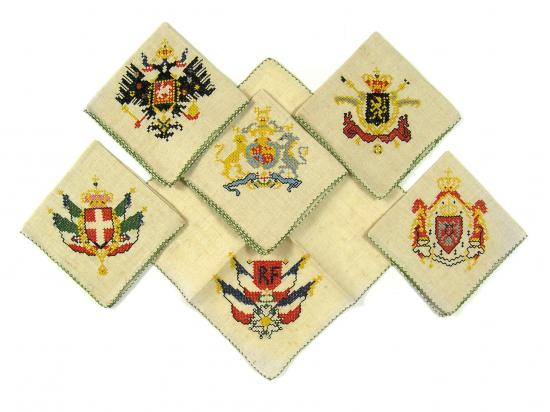 World War I was without a doubt a watershed event for women’s military service in the United States and elsewhere.  However, we do not want to restrict our definition of women in the military to only women who served in the military. Instead, we want to broaden our understanding to include the women whose lives were affected by the military and the war: women who were left on the home front, women who saw their husbands and sons go off to fight, women in Europe who experienced the war firsthand as it ravaged their hometowns, and even the women in media and art who symbolically represented freedom, virtue, and victory and spurred their countrymen and women to arms.  Therefore, the following sections of this object group showcase items from across the Smithsonian and across the entire spectrum of women’s experiences in World War I.

The sections in this object group do not progress chronologically.  Instead, they are arranged by collection type and subject matter.  The latter sections of this object group highlight resources related to women in World War I that are held by other Smithsonian museums and archives.

The Women in World War I object group was made possible through the generous support of Bette and Lindsey Hagan and the James Lollar Hagan Internship program.