The National Museum of Natural History often receives requests for information on famous horses which are believed to be part of the Smithsonian's research collection or on display in the exhibit areas. Several of the horses listed are part of the Museum's collection; The rest are displayed or stored at other institutions. The following facts have been compiled from the files of the Division of Mammals of the Museum's Department of Systematic Biology, Vertebrate Zoology Section, personal correspondence, and accession and catalogue records. 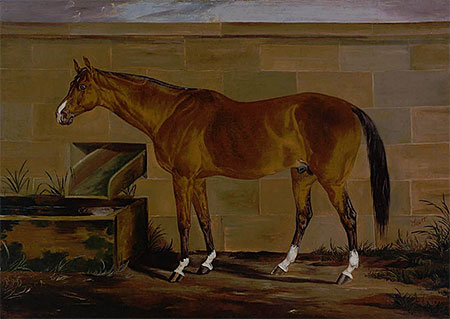 The famous race horse, Lexington, was born in 1850, stood 15 hands (63 inches), 3 inches high, and on April 2, 1855, set a record at the Metaire Course in New Orleans by running 4 miles in 7 minutes, 19 3/4 seconds. Perhaps his greatest fame was as sire to numerous brood mares and successful racers, one of whom was Preakness, namesake of the classic race at Pimlico.

Lexington died July 1, 1875, at Woodburn Farm, Woodford County, Kentucky and in keeping with his status, was buried in a coffin in front of the stables housing his harem. Finally, in 1878, his owner, A.J. Alexander, through the auspices of Dr. J.M. Toner, donated the horse's bones to the United States National Museum. Professor N.A. Ward of Rochester, New York, was asked by the Museum to supervise the disinterment and prepare the skeleton for exhibit. Currently, the articulated skeleton can be seen on display in at the International Museum of the Horse in Lexington, Kentucky. 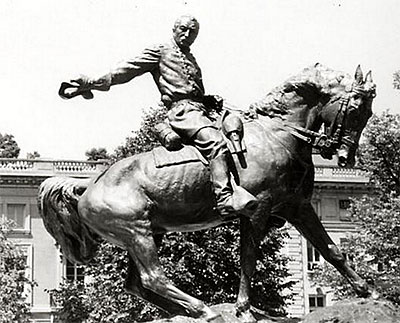 General Philip H. Sheridan's horse during most of the Civil War, Winchester was mounted and presented to the Smithsonian in 1923 by the Military Service Institution, Governor's Island, New York. The horse's name, originally "Rienzi," was changed to Winchester after carrying Sheridan on his famous ride from Winchester, Virginia to Cedar Creek, Virginia in time to rally his troops and turn almost-certain defeat into victory.

The horse died October 10, 1942, in Front Royal, Virginia. Hoping to have the horse mounted, the War Department, Front Royal Quartermaster Depot, Remount of Front Royal, Virginia, turned over the remains to the U.S. National Museum. However, because of Kidron's age at the time of his death and because the body had decomposed rapidly due to hot weather, taxidermists were unable to mount the skin.

On March 31, 1943, the Office of the Registrar at the Smithsonian accepted as a transfer from the War Department, the skin and skull of Kidron. These remains are now part of the research collection of the Division of Mammals in the National Museum of Natural History.

Also known as the "Pride of the Desert," this Arabian horse beat 19 Morgan horses winning the Justin Morgan Cup in Vermont on June 1907.

He was brown, without white markings, stood 14.2 hands high and weighed 960 pounds. According to his owner, Homer Davenport, the horse was acquired on August 8, 1900, from Nazim Pasha, the governor of Syria and Aleppo, who had received it from the supreme sheik of the Anezeh. The origin of the stallion was cited as Mesopotamia (Anezeh Arabians). He was supposedly bred by the Gomussa tribe of the Sebba Anezeh. His mother was the last of the distinguished Maneghi Sbeyel mares, tracing back more than 500 years, and his sire was a stallion of the family of Sueyman Sebba of the southern desert.

After Haleb's death on November 10, 1909, at the age of 8, his skull and partial skeleton, prepared by Ward's Natural Science Establishment in Rochester, New York, were donated to the Smithsonian by Davenport. The Division of Mammals assigned a catalogue number to the specimen on December 9, 1910, and placed it in the research collection.

Old Henry Clay, often called "America's National Thoroughbred Trotting Horse" or "Father of American Trotting Horses," was foaled on Long Island in 1837 and purchased by Colonel William W. Wadsworth of Seneso, Livingston County, New York. When his days as a famous trotting horse were over, he was used for breeding and finally died at Lodi, New York in the spring of 1867. In life the horse stood 15 1/4 hands high. (61 inches)

Some 14 years after his burial, Old Henry Clay's bones were dug up and his skeleton mounted by Ward's Natural Science Establishment in Rochester, New York. The skeleton was donated to the United States National Museum on April 22, 1881, by the Honorable Erastus Corning and Henry C. Jewett through the auspices of Randolph Huntington.

Only the mandible, a part of the skull, remains as a remnant of Old Henry Clay. It is kept in the research collection at the Smithsonian's Museum Support Center in Suitland, Maryland.

The American Museum of Natural History in New York City (which is not part of the Smithsonian Institution) is home for the skeleton of famous racehorse Sysonby. From 1904, as a two-year old, to 1906, his series of victories assured him a place in racehorse history.

The horse died June 1906 at the age of 4 years and 4 months, and his remains were donated to the Museum in July of that year by James R. Keene. Funds for the skeletal preparation were also provided. In 1908, S. Harmsted Chubb, anatomist and research associate at the Museum, mounted the skeleton to demonstrate a phase in the stride of a running horse. The Chubb series of skeletons are famous as studies in anatomy and locomotion.

Currently, Sysonby is in the storage area of the Museum with other horses of the Chubb Collection.

The skeleton of Hanover, another famous racehorse, is at the University of Kentucky in Lexington.

Traveller, famous as General Robert E. Lee's horse, died in 1872, two years after Lee. Initially the horse was buried, but in response to numerous requests, it was disinterred and the skeleton mounted and displayed at Washington and Lee University in Lexington, Virginia. After more than 60 years on exhibit, on May 8, 1971, the horse was reburied outside the Lee Chapel at the University close to the Lee family crypt.

Defeat rather than victory brought fame to Comanche. He was known as the sole survivor of General George Custer's command at the Battle of the Little Bighorn on June 25, 1876.

Of mustang lineage, he was born about 1862, captured in a wild horse roundup, gelded and sold to the U.S. Army Cavalry on April 3, 1868, for $90. The bay, 925 pounds, standing 15 hands high with a small white star on his forehead, became the favorite mount for Captain Myles Keogh of the 7th Cavalry. He participated in frequent actions of the Regiment and sustained some 12 wounds as a result of these skirmishes.

Two days after the Custer defeat, a burial party investigating the site found the severely wounded horse and transported him by steamer to Fort Lincoln, 950 miles away, where he spent the next year recuperating. Comanche remained here with the 7th Cavalry, never again to be ridden and under orders excusing him from all duties. Most of the time he freely roamed the Post and flower gardens. Only at formal regimental functions was he led, draped in black, stirrups and boots reversed, at the head of the Regiment.

When the Cavalry was ordered to Fort Riley, Kansas, in 1888, Comanche, aging but still in good health, accompanied them and continued to receive full honors as a symbol of the tragedy at Little Bighorn. Finally, on November 7, 1891, about 29 years old, Comanche died of colic.

The officers of the 7th Cavalry, wanting to preserve the horse, asked Lewis Lindsay Dyche of the University of Kansas to mount the remains: skin and major bones. For a fee of $400 and on condition that he be permitted to show the horse in the Chicago Exposition of 1893, Dyche completed the appropriate taxidermy. Although there is no record of the fee being paid, the horse was donated to the university's Museum and property rights are vested in the University through L.L. Dyche.

Comanche is currently on display in a humidity controlled glass case at the University of Kansas Museum of Natural History, Dyche Hall, Lawrence, Kansas.

Little Sorrel, or "Fancy" as he was known, became famous as the mount of General Stonewall Jackson. Captured at Harpers Ferry by the Confederates, he was chosen initially for Mrs. Jackson but eventually commandeered by the General when his own horse, Big Sorrel, proved unreliable in battle.

In 1863, at Chancellorsville, Jackson, while riding the horse, was wounded by his own men and died a few days later. At first Little Sorrel was pastured at Mrs. Jackson's home in North Carolina, later sent as a mascot to the Virginia Military Institute where the General had taught cadets he led to battle, and then in response to requests from many Southern States, was shown at fairs and exhibitions.

In 1885, ancient and infirm at the age of 35, he was retired to the Confederate Soldier's Home. The following year he died when the hoist used to lift him to his feet slipped; he fell breaking his back. Little Sorrel was stuffed and housed in a museum at the Veterans Home until 1949 when he was finally returned to V.M.I. Refurbished twice since 1886, Little Sorrel is presently on display at the Virginia Military Institute's Museum in Lexington, Virginia.

Neither a racehorse nor the mount of a famous general, Trigger, owned by movie star cowboy Roy Rogers, brought pleasure and excitement to countless motion picture patrons.

The golden palomino stallion appeared in all of Rogers' 90 feature films and 101 television shows. According to his owner, "He had great rein and could spin on a dime." Inheriting the best characteristics of his sire, a thoroughbred racehorse, and his dam, a golden palomino, Trigger had stamina, beauty, intelligence, and a remarkably gentle disposition.

On July 3, 1965, at the Rogers ranch in Hidden Valley, California, Trigger, 33, succumbed to old age. Reluctant to "put him in the ground," Rogers had the horse mounted in a rearing position by Bishoff's Taxidermy of California.

Trigger, in full regalia - bridle, saddle, and martingale - is presently on exhibit at the Roy Rogers - Dale Evans Museum in Branson, Missouri, the repository for the Rogers memorabilia.

Information on Comanche, courtesy
of the University of Kansas Museum of Natural History Lawrence, Kansas.